Being bullied is bad for your health 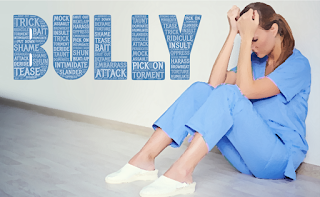 Bullying in healthcare has received increasing attention in recent years generally and on the pages of JAN. Bullying is an unpleasant and unnecessary phenomenon but what is the evidence that is it harmful to health? A UK-based study by Lever et al. (2019) and published in JAN titled: 'Health Consequences of Bullying in the Healthcare Workplace: A Systematic Review' aimed to: 'review both mental and physical health consequences of bullying for healthcare employees'.

The authors concluded: 'This systematic review has shown that perceived workplace bullying in healthcare settings is prevalent and associated with negative mental and physical health consequences. Primary prevention of workplace bullying and/or early intervention, should lead to an improvement in the mental and physical health of staff and patients. In addition, a reduction in bullying should lead to cost savings due to a decrease in sick leave and costly events associated with presenteeism such as additional patient care or litigation.

You can listen to this as a podcast.

Email ThisBlogThis!Share to TwitterShare to FacebookShare to Pinterest
Labels: bullying

Commentary on: A systematic review of the use of music intervention to improve outcomes for patients undergoing hip or knee surgery

Lene S. Petersen, Ole Richard Due-Hansen, Tahir Masud, Jens-Ulrik Rosholm
We read with interest the article by Sibanda et al “A systematic review of the use of music interventions to improve outcomes for patients undergoing hip or knee surgery”(1).  We find the non-pharmacological approach very important and have performed a feasibility study to examine whether music can prevent delirium in older hospitalized patients in a geriatric medicine unit.

Delirious patients are described as costly for the health care. Delirium is associated with longer hospitalization, higher mortality and increased risk of permanent neurocognitive deficits (2-3).  To our knowledge no previous studies have investigated the idea of using music to prevent delirium in a conventional geriatric medicine ward.  Our study was performed on the principles of Bowen et al for feasibility studies (4).

The study was carried out at the Department of Geriatric Medicine at Odense University Hospital in Denmark, which has 40 inpatient beds. The study period was divided into two “non-music  control periods” (24 days and  32 days), interspersed by one  “music intervention period” (20 days). The music played was calm music i.e. 'MusiCure' [5] composed by Niels Eje and intended to mask  every-day noise in the department.  Music was played from 8 am to 12 pm and from 2:30 pm to 8 pm using ordinary stereo-equipment in 10 bedrooms. The music was only turned off/muted by the staff in extraordinary circumstances. If the music was turned off, the reason was recorded. The sound level was adjusted daily to 50 decibels in the middle of the room.

The delirium diagnosis was made with the Confusion Assessment Method (CAM) using Mini-cog as the screening tool. The tests were performed between 9 am and 12pm by the same three investigators (a physician and two nurses), all educated in CAM-testing. The primary outcome was the proportion of delirious patients per day at the time of testing. Participating patients, staff and relatives, were asked to complete a questionnaire regarding their opinion about the intervention

One hundred and sixty-eight patients were recruited into the study with a mean age of 83 (SD 68-95) years. There was a non-statistically significant trend towards a reduction in delirium days in the “music period” compared to the “non-music periods” (Table 1).

Table 1 Prevalence of delirium during music and non-music periods.

A total of 37 patients, 41 relatives and 33 staffs answered the questionnaires and it showed that the intervention was generally well accepted by the patients, staff and relatives. A total of only 45 interruptions of the music were registered during this study.  32 of these were due to technical problems.

Our study demonstrated that it is feasible to set up a study with the aim of assessing if calm, specifically composed music can prevent delirium on a geriatric medicine ward. The music intervention was well accepted by staff, patients and relatives, was performed without any major difficulties, and showed a tendency towards reduced delirium, suggesting that a further adequately powered study is indicated. It is important to bear in mind that such a study would demand extra resources to perform CAM-scorings, registrations and establishment of music equipment plus composing/purchasing the right music. Power calculations (with two-sided α = 0.05 and power = 0.80) showed that a future definitive trial would need the randomization of at least 366 patients in each group (intervention and control) in order to detect a 20% reduction in the incidence of delirium.

A number of limitations to the feasibility study need to be considered. Firstly patients were admitted for up to 24 hours in the acute admissions ward before transfer to the geriatric medicine ward. Secondly CAM-scoring was only performed once a day, with the risk of not diagnosing  all delirium episodes. Finally, only a limited number of the participants gave their opinion about the playing of music.

We conclude that it is feasible to set up a larger adequately powered study to examine whether a music intervention can prevent delirium. There is no conflict of interest to disclose.

Nurses are in danger from occupational radiation 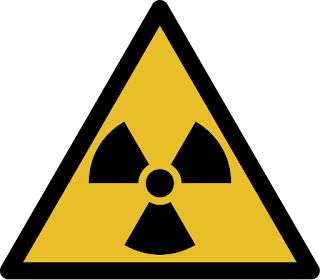 Scrub nurses are in more danger from occupational radiation than doctors, according to a study from Australia by Wilson-Stewart et al. (2019) titled: Occupational radiation exposure to the head is higher for scrub nurses than cardiologists during cardiac angiography and published in JAN. The study aimed: 'to compare the head dose of a cardiologist to scrub and scout nurses during cardiac angiography' and studied over 600 coronary angiograms performed by one doctor and 22 nurses.

The results showed that: 'scrub nurses received on average 41% more head dose than the
cardiologist during diagnostic procedures and 52% higher doses during interventional cases'. The authors concluded: 'While there have been many studies examining occupational head dose to the medical operators during fluoroscopic procedures, there is very little reported evidence regarding dose to the nursing personnel. In this research, occupational radiation dose to the heads of nursing staff is significantly higher than the dose to the medical operator. While the recorded doses in this study were well beneath the recommended annual limits, the ideal situation is to minimize the risk of occupational exposure, therefore it is advisable that all staff wear protective lead glasses and skull caps... Future research in this area should include specific investigation of nursing staff to highlight factors which have an impact on occupational radiation dose'.

You can listen to this as a podcast. 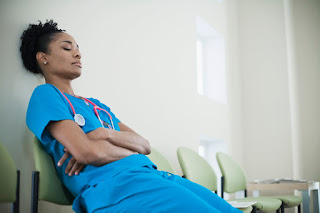 It may be my imagination but there seems to be a lot of attention being paid to what nurses do during night shifts. Indeed, we return to the subject of napping which was the subject of a previous post. This time I consider an article from Israel by Zion and Shochat, published in JAN in 2019 and titled: 'Let them sleep: The effects of a scheduled nap during the night shift on sleepiness and cognition in hospital nurses'.

The aim of this study was to: 'to examine the effectiveness of a scheduled 30‐min nap and its interaction with individual factors on sleepiness and cognition during an 8‐hr night shift.' One hundred and ten female nurses participated and a range of information was gathered about them such as age, chronotype (night or day), body weight, number of children. They all took a 30 min nap on 'nap night' after which sleepiness was monitored along with physical activity and they were given a test of mental ability. These were compared with the nights when no nap was taken.

Sleepiness was reduced on nap nights and performance on mental ability tasks was also greater on nap nights. The authors conclude: 'A scheduled nap may provide a useful countermeasure against the
negative consequences of night‐time shift work in female nurses above and beyond interpersonal differences. The implementation of this strategy is cost‐effective but requires a change in managers’ attitudes and the establishment of policies that allow nurses to nap in a safe environment without compromising the quality of patients’ care.'