If your mother was a nurse... 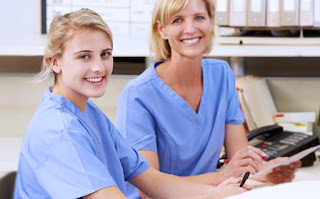 Seven mothers and daughters who were nurses were interviewed. It seems that the daughters 'had a sense of responsibility to fulfill their duties in nursing' and this was expressed as: 'having affection for nursing per se; regarding the person per se as the primary value in nursing, instead of the person as a patient; and making a resolution to become a good nurse.' The authors concluded: 'The results showed that these daughters became familiar with nursing from childhood; perceived the nursing profession as their destiny; reflected their mothers’ language, attitudes and thinking; and came to like the nursing occupation. These factors affected the formation of their current occupational values in treating patients. However, when they became nurses, the influence of their mothers left them feeling burdened, which eventually engenders conflict and they felt obliged to endure and cope with that burden. 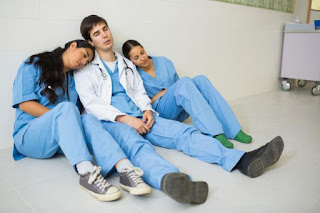 One of the almost unavoidable - and least pleasant - aspects of working as a nurse is the inevitable shift work. Some aspects are attractive but each has its drawbacks and as a clinical nurse I often looked with envy on my friends who worked '9-5' jobs. There seems to be no ideal shift to work and we vacillate in the health services between a few long - normally 12-hour - shifts to shorter 'early' and 'late' shifts and, of course, this is always interspersed with night shifts, which I hated despite being in them permanently for a long time.

This study by Stimpfe et al. (2019) from the USA titled: 'A comparison of scheduling, work hours, overtime and work preferences across four cohorts of newly licensed Registered Nurses' and published in JAN aimed to: 'conduct a comparative analysis of four cohorts of newly licensed registered nurses and their work schedule, daily shift length, weekly work hours, second job, and weekly overtime hours.' The results showed that there: 'were statistically significant differences in overtime across cohorts and shift length by unit type. The preferred shift length was 12 hrs and day shift was the preferred work schedule.' Specifically, 'nurses working in intensive care or stepdown intensive care units (96.3% and 93.0%) worked 12‐hrs shifts compared with 86.5% of  general medical‐surgical units and only 54.3% in other units. Eight‐hour shifts were more common in other units at 31.7%.'

The authors conclude: 'Nurses working long work hours and overtime have been associated with poor patient outcomes and nurse turnover; however, little is known about the trends in newly licensed nurses work hours, scheduling, and overtime. Our four‐cohort analysis of newly licensed nurses from 2004 to 2015 revealed that new nurses, like experienced nurses, are working 12‐hrs shifts, voluntary and mandatory overtime and over 10% hold a second job. Nurse managers, policymakers, and researchers should pay attention to new nurses’ schedule and shift preferences and guard against mandatory overtime hours.

The effect of violence prevention strategies on perceptions of workplace safety

Our article entitled ‘The effect of violence prevention strategies on perceptions of workplace safety: A study of BC medical-surgical and mental health nurses’ provides insight into the strategies that can potentially protect medical-surgical and mental health nurses against workplace violence. Workplace violence is on the rise globally with the highest rates of physical violence and sexual harassment found among US and Canadian nurses (Spector, Zhu & Che, 2014). A majority of previous research used descriptive methods to identify the prevalence of nurse violence in the workplace. This study addresses a gap in identifying violence prevention strategies most predictive of nurses’ perceptions of workplace safety. This study highlights the importance of direct care nurse engagement and the findings will particularly appeal to employers and nurse leaders in medical-surgical or mental health settings.

This study found that there were similarities and differences in violence prevention strategies important to medical-surgical and mental health nurses. Regardless of the setting, nurses with employers who listened to them, and nurses who were not expected to physically intervene during a code white situation reported higher levels of workplace safety. Although medical-surgical nurses felt safe when code white incident reviewers were conducted, and fixed alarms were used, mental health nurses felt safe when they had enough properly trained code white respondents on their units. Overall, this study demonstrated that there were differences by sector, reinforcing the importance of consulting with direct care nurses during design, implementation, and evaluation of violence prevention strategies. The authors’ key message was that ‘promoting a safe workplace is everyone’s responsibility e.g., clients and families who interact with healthcare staff in a respectful, non-violent manner; nurses who recognize that violence is NOT part of the job and report actual and potential violence incidents to the responsible authority; employers who value and invest in an organization-wide culture of safety and comply with legislative and contractual requirements to ensure workplace safety; and health authorities and government who mandate organizations to enforce policies and procedures to prevent violence in the workplace (British Columbia Nurses Union, 2017).’
____________________________________________________________________

The Changing Face of Modern Nursing

The nursing profession has witnessed significant change in the previous 30 years. This is no more evident than in the way in which nurses are now educated.

Traditionally in the UK, student nurse training was based on apprenticeship models, the focus being on curing illness. Students worked on the wards as part of the numbers and were paid a salary. Radical changes were introduced in Project 2000 the most obvious being an increase in theory and the assimilation of shared health-based learning.

In 2013 changes to educational standards required all new nurses to hold a degree-level qualification in order to register as qualified nurses. Essentially developing a workforce capable of thinking independently and able to make complex clinical decisions. This change however has led to a limited pool of students who could potentially become qualified nurses and has been met with mixed reactions.

These standards; driven by societal changes has required nurses to adapt their practice in a way that promotes patient-centred care.

With the increase in status of an all-graduate nursing profession, it has been suggested nurses are losing their caring image. Nurses need to demonstrate that the move to an academic profession has not robbed them of this role. Despite such criticism, research demonstrates that having a well-educated nursing workforce leads to better patient outcomes.

The witnessing of a crisis

Increasingly nursing is witnessing an unfolding crisis. With a removal of the nursing bursary, diminished staffing levels, and an ageing nursing workforce nursing could be considered at breaking point.

Furthermore a report produced by the Institute for Employment Studies (IES) in July 2016 revealed the increasing numbers of nurses working in the NHS from EU countries. Although this may have helped to plug a hole, this is not the answer . Brexit has seen a clear surge of nurses moving away from the UK and a time when they may be needed the most.

Today's men and women, have choices and increasing expectations of higher education and their professional lives. Agencies responsible with commissioning education for future NHS workforces are demanding greater attention is given to selection processes, to ensure that the ‘right’ people are being recruited. Nurses qualifying today may still be in the workforce in 2070. The more educationally able the workforce is, the better it is for patients and communities.

Ultimately nursing recruitment will not be solved by an increase in nurses coming through University. One way in which the crisis can potentially be reduced is the recent introduction of a four-year apprenticeship scheme that allows students to ‘earn while they learn’ and to become degree-registered nurses whilst working in the NHS, without needing to complete a traditional university degree.

Challenges to the solutions:

It also appears that degree nursing is also floundering. A recent report by The Health Foundation states that there has been a decrease in the number of student nurses, attending university with more than 1,200 fewer starting an undergraduate degree in 2017 than the previous year. Although, the report argues that the changes to the funding arrangements are in part responsible for this, they are not the only cause. Interestingly however, there are those who argue that nurses don’t need bursaries. Whatever your opinion, it is clear that the debate rages on.

The student loans system has also recently come under fire from the House of Lords economic affairs committee after figures showed nurses must repay back £19k more than lawyers and highly-paid bankers during their careers. Likewise male nurses and midwives will repay a total of £133,000 over their working lives, which is essentially thousands more than male financiers (£127,000) and legal professionals (£114,000).

To help reduce the impact of the loss of bursaries a recent parliamentary committee has recommended that high interest rates on student loans should be cut from 6 per cent to 1.5 per cent to prevent middle-earning graduates from paying back more and argues that the higher education system offers poor value for money to students and the taxpayer, and that funding is “too heavily skewed” towards degrees.

Ultimately, change within nurse education in particular must be managed effectively, or the crisis is likely to continue.
No comments: