People with a diagnosis of dementia experience many changes to their social networks - and the dynamics of these changes and their effects were explored in a participatory secondary data analysis project funded by the Economic and Social Research Council held by Professor Charlotte Clarke and Heather Wilkinson (University of Edinburgh, UK) and in partnership with the Mental Health Foundation and Alzheimer Scotland (ES/L01470X/1 - Inciting dialogue and disruption –developing participatory analysis of the experience of living with dementia and dementia care). More information about the research is available at Talking Dementia.

The research re-analysed a qualitative dataset of 156 interviews with people diagnosed with dementia and their family carers which had been collected as part of the Department of Health funded study into peer support and dementia advisor roles within the National Dementia Strategy for England (see Clarke et al 2013, 2014, 2016; Keyes et al 2014). We worked with a further 35 people living with dementia to co-analyse the data, using the format of a series of four workshops with each of four groups to achieve this. An analytical framework was based on:

The key findings of the analysis were that:

In this research process, the analysis moved between individual voices and composite pleural voices – firstly, having heard the ‘individual’ narratives of people living with dementia in the 156 interviews of the original dataset, and secondly worked with a further 35 people living with dementia during the secondary data analysis, the research process thirdly joins the identified research themes together in the development of a created and performed single narrative (Michael’s Map) – leaving the final voice of interpretation with yourself as audience rather than in the academic telling.

The film Michael's Map has been produced in a partnership between the University of Edinburgh and Skimstone Arts and is freely available at on Vimeo.

We would very much appreciate hearing about how you use the film and to what effect – so please do email me.

How do we select potential nurses?

In the UK recently a great deal of attention has been paid to the preparation of nurses, including the initial selection process. Interviewing - despite a complete lack of evidence - appears to be the backbone of UK government policy, and this study from the UK by Traynor et al (2016) studies the use of interviews in nursing student selection. The study titled: 'Identifying applicants suitable to a career in nursing: a value-based approach to undergraduate selection' is published in JAN and aimed to: 'complement existing evidence on the suitability of Multiple Mini Interviews as a potential tool for the selection of nursing candidates on to a BSc (Hons) nursing programme.'

Over 300 undergraduate nursing students took part with over 30 assessors and used the Multiple Mini Interview which is: 'modelled on the Objective Structured Clinical Examination and consists of several stations each with a different examiner.' The results were promising in that the method appeared to be reliable between assessors. However, there was no correlation with original interview scores or with academic performance. The authors conclude: 'We have shown that implementing an (Multiple Mini Interview) based on the assessment of  values is a feasible approach to selection in undergraduate nursing' but that there is a 'need for further improvement.'

What do nursing support workers do?

What do nursing support workers do that is the same or different form Registered Nurses? Nursing support workers is a general term coined by Christine Duffield - a co-author in this study from Australia - which describes nursing co-workers such as nursing assistants, care assistants and auxiliary nurses. The study by by Roche et al. (2016) and published in JAN titled: 'A comparison of nursing tasks undertaken by regulated nurses and nursing support workers: a work sampling study' aimed to: 'determine which tasks unregulated nursing support staff spend their work time undertaking and to determine differences between the work undertaken by licensed/regulated nurses on units which have nursing support workers and those on units which do not.' As explained by the authors: 'Data were collected from 10 sampled units: six in one large teaching hospital and four in two small non-teaching  hospitals. Nurses on the units were observed in randomly assigned 2 hour blocks occurring Monday through Friday between the hours of 7 am-7 pm over 2 weeks.'

Cancer screening by nurses and midwives

Over 5000 nurses and midwives were surveyed and the data analysed to see what factors were related to cancer screening behaviours. Generally, nurses and midwives underwent cancer screening more frequently than the general population but part-time workers were more likely to do this than full-time workers and those working shifts were less likely to undergo screening than those in office-based jobs.  There were differences for the different types of cancer: breast; bowel; skin; and prostate, which are explained in the article.

The authors concluded: 'Higher participation rates in nurses, compared with the general public, are good news for the health of nurses and midwives and the community that relies on their care. Study findings suggest this ageing workforce is making protective choices which will impact their future risk of illness and premature departure from the workforce. However, findings also indicate avenues to further improve participation rates, particularly for skin and bowel cancer screening, and to ensure those thinking of undergoing screening fully understand its relative risks and benefits.'

I could not introduce this better than to use the author's own words: 'Although menstruation is a shared experience for most women, it is a subject and a process that historically has been surrounded with secrecy, shame and lack of knowledge.'

The author concluded: 'The study confirms that menstrual-related experiences influence women’s objectification, in particular age at menarche and belief that menstruation predicts behaviour in some
way.' She made a series of recommendations for research and, with relevance to practice, said: Healthcare providers and in particular nurses, could and should assist girls and women in developing a positive view of their body and its reproductive functions. Because of the central role nurses occupy in healthcare systems worldwide, they are optimally placed to give consultations to women and girls on their body and menstruation.'

SVEINSDӦTTIR H. (2016) The role of menstruation in women’s objectification: a questionnaire study. Journal of Advanced Nursing doi: 10.1111/jan.13220
No comments: 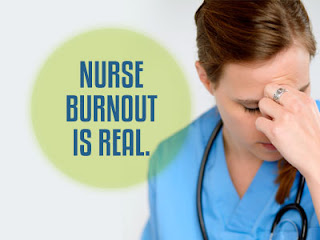 Newly graduated nurses are a valuable commodity. There has been a lot of investment in their education and they bring new knowledge and enthusiasm to the health services where they work. So what causes them to burnout and, in many cases, leave? This study by Boamah et al. (2016) from Canada titled: 'Factors influencing new graduate nurse burnout development, job satisfaction and patient care quality: a time-lagged study' aimed to: 'test a hypothesized model linking new graduate nurses’ perceptions of their manager’s authentic leadership behaviours to structural empowerment, short-staffing and work–life interference and subsequent burnout, job satisfaction and patient care quality.'

How do children who use wheelchairs view exercise? 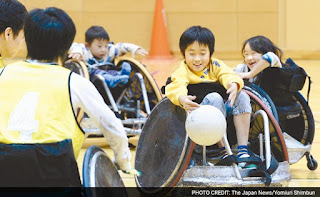 It can be hard to convince children who are not disabled about the benefits of exercise but what about children who use wheelchairs? How well do they understand the benefits of exercise and what part do their parents play in encouraging them? This is the focus of a stduy from the UK by Noyes et al. (2016) titled: 'Conceptualization of physical exercise and keeping fit by child wheelchair users and their parents'  which aimed to: 'gain a better understanding of how children aged 6–18 years who use wheelchairs and their families conceptualized physical exercise and keeping fit.' Twenty four children and 23 parents were interviewed.

The majority of the children claimed that they regularly took part in exercise, mostly three times per week. The children took part because they enjoyed the activities and met friends. Generally, they could see the benefits. The benefts, for example confidence, transferred to other activities. However, children did confuse exercise with therapy. On the other hand, parents were able to distinguish between therapy and exercise.

The authors conclude: 'Proactive and physically active parents can go some way to compensate for the lack of health promotion support and advice and to overcome the considerable barriers, to enable their disabled children to engage in and benefit from physical exercise' and '(m)isconceptions and misunderstandings of children about the differences between and benefits of therapy and physical exercise are likely to hinder their ability to better self-manage their health and weight as they grow up. Professionals (including nurses) need to improve the clarity of their communications to correct children’s misunderstandings about the respective benefits of therapy and physical exercise.'