Nurses represent a significant group among health professionals and are well placed in most inpatient and community settings to provide advice, information and monitor the effects of drugs on patients in n is currently not as comprehensive in nursing curricula. Current curricula concentrates on medication competence which comprises accurate administration of drugs (using the 6 rights- right person, right drug, right dose, right time, right route and right documentation). However medication competence also includes a detailed and comprehensive understanding of drugs, how they are absorbed, metabolized and eliminated by the body and what receptor sites they target once the drug is absorbed (holding implications for either desired or undesired effects when monitoring drug impact for patients) and an ability to apply that knowledge to the real world context (Sulosaari et al. 2011). 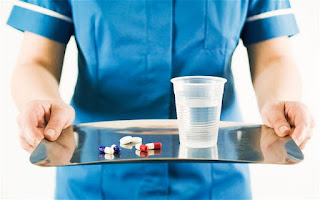 Nurses are well aware drugs are in the first instance absorbed into the body. This can occur orally, rectally, paternally (IV), via inhalation, through the skin, or the mucous membranes (via snorting, sniffing). Not all nurses are familiar however with the details of what happens once the drug absorbed. Drugs are distributed to the body via the blood stream, passing various barriers to reach receptors. Barriers to drug distribution include the blood-brain-barrier (a drug diffusing from blood to brain must move through the cells of the capillary wall and the drug must then move through the fatty glial sheath) and the placental barrier (these are unique membranes; Edward & Alderman 2013). Importantly, drugs are generally distributed to several areas of the body at once and it is not possible to measure the concentration of the drug at any one specific site, therefore blood levels of a particular drug are usually measured to ascertain drug concentration. This information is considered in conjunction with the known pharmacokinetic characteristics of the drug to make a reasonably accurate assessment of how that drug is performing within that person.

Understanding the metabolism of drugs is important. Drugs can be metabolized by oxidization, hydration, reduction, and hydrolysis to name a few internal processes. Drug metabolism often converts the drug into readily excreted products and metabolism occurs in many bodily tissues however most predominately located in the liver. The liver contains hepatocytes (liver cells) which contain enzymes that are a major component of drug metabolism (Edward & Alderman 2013). A few of these enzyme families, particularly Cytochrome families are involved in most drug biotransformations. Important to nursing care, nurses need to understand that drug metabolism rates vary between patients due to variables such as hydration, organ health, comorbid conditions, weight, and age. Intuitively if the body increases the amount or activity of drug metabolizing enzymes, then the rate at which all drugs metabolized by these enzymes should increase. Therefore, drug tolerance develops as the blood level of a drug for a given amount taken falls more rapidly than would be expected if tolerance had not developed. Drug tolerance is known as a state of progressively decreasing responsiveness to a drug. Physical dependence is an entirely different phenomenon from tolerance, even though the two are often associated temporally.

In the administration of medications and in consideration of drug metabolism nurses also need to understand the half-life of the drug. The biological half-life of a drug is the time required for the drug concentration in the blood to fall by one-half, and also the determinant length of time necessary to reach a steady state concentration (Edward & Alderman 2013). If a second full dose of a drug is administered before the body has eliminated the first dose, the total amount of drug in the body will be greater than the total amount of the first dose. This effect could be cumulative and toxicity may result.

Drug action is also determined by the pharmacodynamics of the drug, which are factors complimentary to pharmacokinetic knowledge and are useful to determine the influence of person-specific factors on drug therapy. These person-specific factors include such things as age, chronic conditions, and body mass (Edward & Alderman 2013). For many drugs the effects of a drug within the body occurs by the interaction of the drug with a receptor. But not all drugs exert actions through direct binding to receptors. For example enzymes facilitate chemical reactions of drugs and are found throughout the body. The use of drugs in treatment always carries some degree of risk for unexpected and unwanted effects known as adverse drug reactions (ADRs). People may present idiosyncratic ADRs (these are quite common in practice), such as a minor rash on the skin. Other ADRs may be more serious. In either scenario nurses are required to evaluate and monitor ADRs (a useful tool to use in assessing for ADRs is the Naranjo Questionnaire) (Naranjo et al. 1981). Furthermore, drug interactions may affect the therapeutic properties of drugs when people are taking more than one drug. These too are individual where ADRs may arise in some people on the same drug combination but not in others.

Current and comprehensive knowledge of the pharmacokinetics and pharmacodynamics of drugs have implications for nursing management of patient care. Medication competence in nursing is multifaceted requiring broader understanding of medication management than that currently taught in undergraduate nursing curriculums which focuses on drug administration and drug calculations, adherence and legal considerations. Using the nursing process (assessment, planning, intervention and evaluation) nurses can identify and monitor factors that may affect or alter drug absorption and consequent action. These factors may be related to gastrointestinal pathology (gastroenteritis), a chronic condition such as diabetes or renal impairment, or concomitant drug therapy. Since serious effects can arise with alterations to the pharmacokinetics and the pharmacodynamics of drugs continuous nursing evaluation is necessary and complete knowledge of the actions and interactions of drugs is essential. Inclusion of more detailed pharmaco-considerations in undergraduate nursing curriculums is suggested.