Which parents are more likely to call an ambulance unnecessarily for a sick child? 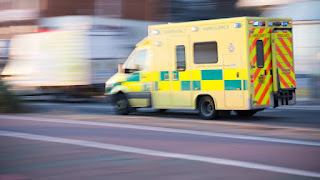 Having a sick child is stressful for parents and there is always the issue of whether or not to summon help, sometimes from the ambulance service. Not every instance of parents calling an ambulance is necessary, but which parents are most likely to make unnecessary calls? This as the subject of a study by Ueki et al. (2019) from Japan titled: 'Parental factors predicting unnecessary ambulance use for their child with acute illness: A cross‐sectional study' and published in JAN. The aim of the study was to: 'examine characteristics of parents of children with acute, albeit mild, illnesses who used ambulance transport unnecessarily' and over 170 parents who had visited the emergency department of a hospital were questioned.

The results showed that 'parents who did not use resources to obtain information regarding their child’s illness, had low health literacy, were observing presenting symptoms for the first time in their child, or had high uncertainty, were significantly more likely to unnecessarily use ambulances. The authors concluded: 'Publicizing available resources regarding child health information, social health care activities to raise parents’ health literacy and explanations in accordance with parents’ uncertainty, especially when faced with new symptoms in their child, might reduce unnecessary ambulance use.'

Brexit, the withdrawal of the UK from the European Union, has caused ripples throughout academe and in the literature of health professions. Our article ‘Attitudes to Brexit: a survey of nursing and midwifery students’ (McCrae & Portes, 2018) is a unique contribution to the lively and sometimes rancorous discourse. However, its publication in JAN irked Clifton and Banks (2019), who argue that editorials should not be contaminated with original research data.

On a point of principle, Clifton and Banks express their surprise at ‘a full-blown empirical research paper masquerading as an editorial’. This would be fair criticism if a study bypassed the peer-review system, but it did not. The manuscript was initially reviewed and the editor-in-chief decided not to publish in the submitted form, suggesting instead that we restructure it as an editorial on a matter of much interest to nurses in the UK and Europe.  And while we did not claim any conclusive results, our methods and findings, and the limitations of our study, were presented clearly and rigorously.
Remarkably, Clifton and Banks, after asserting that it is inappropriate to include empirical research within an editorial, decided to bolster their own editorial by conducting fresh empirical research.  ‘We then conducted a very quick and crude scope of the JAN archives for the last five years, to determine how many empirical research articles are classified as editorials.’ Yet accuracy in reporting the results appears to elude them: ‘The answer is very few.’ We’re not asking for an F-test here, but some numbers would help.

Clifton and Banks then switch tack to allege that our article ‘lacks balance’, despite stating that the topic is immaterial to their argument, and their acknowledgment that the ‘point of any editorial is to present an opinion, often controversial’.  They criticise our lack of declaration of political interest at the foot of our article.  Of course, any financial interests or support should be declared; every journal requires this. If we’d had any funding for this research, we would have said so.

But politics are different. We are not aware of any healthcare, humanities or social science journal that requires authors to declare their beliefs. It would be appropriate for a writer to state as a potential conflict of interest a formal role as advisor to a political party, for example, but that does not apply to either of us.

The political transparency for editorials demanded by Clifton and Banks is neither necessary nor desirable.  If an editorial is politically influenced, this will be apparent in what is written. The implication of their argument is that if we wrote an editorial on why Brexit is good or bad for the National Health Service, then we should declare our attitude to Brexit. This is circular reasoning.

Clifton and Banks suggest that editorial submissions be reviewed by more than one editor. This may be a constructive idea, but the purpose of double review should not be to monitor opinion. Clifton and Banks state: -
‘The history of nursing in the UK is underscored with a series of cabals, hidden networks and vested interests. If we want a candid and modern profession, we need more transparency and openness in all aspects of the profession, including academic publishing.’
All professions and institutions are prone to group-think, but this is a very odd charge to levy against us. We suggest that Clifton and Banks have chosen the wrong target for their warning against undue influence. While being colleagues at King’s College London, we are hardly co-conspirators on either nursing (a field in which Portes has no expertise) or on Brexit, where our views - to put it mildly - are very different (as a publication search would show).  But we are both committed to scholarly debate and investigating complex phenomena in our disciplines.

A requirement for declaring political views would not be enforceable (and should not be). Voting is a private exercise in wielding the pencil in the polling booth. This does not prohibit people from divulging their political beliefs, and there is plenty of open discussion among nurses. But nobody should be forced into stating their likes and dislikes. Would an author stating membership of a populist or communist party be fairly considered for publication, and if the article were published, would this have adverse consequences for that author’s career?  A standard for political declarations might reinforce orthodoxy and quell dissent.

Our critics informed readers of their own political stances: Clifton ‘voted remain in the 2016 referendum’ and Banks ‘was a longstanding member of the UK Labour Party’. In their efforts to practice what they preach, they unwittingly leave readers with an unanswered question. How did Banks vote in the referendum? We hope that he does not have anything to hide!